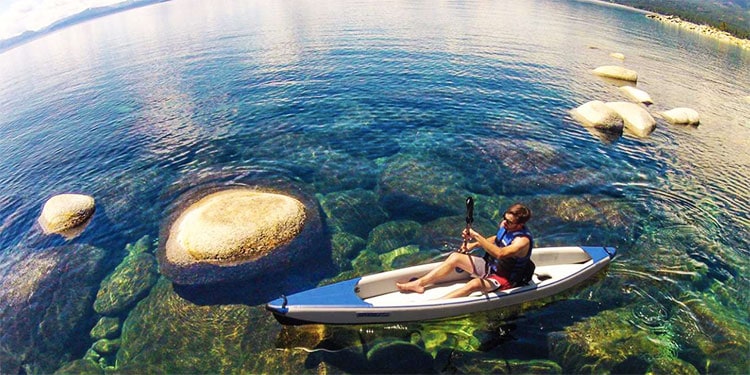 The first time you lay eyes on the Sea Eagle 393rl RazorLite, you’re forgiven for wondering if it’s an inflatable kayak at all. Its sleek design and incredibly rigid hull are more reminiscent of a hardshell kayak than any inflatable, and its speed and performance are almost unprecedented in the world of inflatable kayaks.

If you’re familiar with the Sea Eagle inflatable kayak line, you’ll immediately realize what a departure the 393rl is from their more traditional models, as exemplified by the Explorer, FastTrack, and Sports Kayak ranges. Long and lean, and featuring world-first techniques of construction and design, the 393rl is quite obviously in a class of its own.

And it’s just as obvious that this inflatable kayak is not particularly suited for beginners – in fact, Sea Eagle recommends that it for intermediate and above level paddlers.

Having said all of that — if you’re up to the challenge, the 393rl promises a whole new world of inflatable kayaking. It’s fast, responsive, and exciting.

Before we jump in and go over the details of the Sea Eagle 393rl RazorLite, let’s take a look at its specifications so that you can get a general idea of how it compares to other inflatable kayaks.

As with the larger-capacity Sea Eagle 473rl kayak, the 393rl RazorLite strives to deliver the ultimate in qua